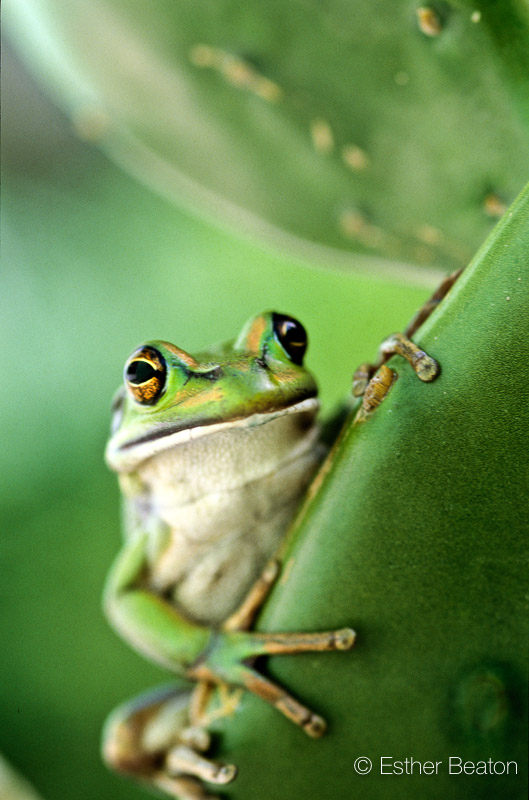 It was the magic year of 2000. Everyone had breathed a sigh of relief that our computers and systems hadn’t gone haywire. In Sydney it was the time of the Olympics. Energy was high. Somehow the threatened Green and Golden Bell Frog became emblematic of this productive and heartfelt era.

I was on assignment for Australian Geographic to do a story on this little mascot. Frogs in general are cute. But this guy was also gorgeous with his flashing turquoise thighs.

I love editorial assignments like this. They give me the freedom to shoot my own style of photography, to do my own research, and find my own locations and subjects to pursue. Aside from the topic “Green and Golden Bell Frog”, AG usually lets the writer / photographer team free to develop our own themes.

For this story I made sure to cover a range of subjects: the scientists, like Tandy Rowley, Arthur White, and Graham Pyke; the places such as the Brick Pit, Long Reef golf course, and the frogs from tadpoles to adults, at all times of day and night, and in various states of behaviour: swimming, jumping, diving, hiding. I try to cover all needs: the writer’s topics, the editor’s point of view, the art director’s preferences. So I shoot a lot, even if only a small percentage get used.

One location where the endangered Green and Golden Bell Frog was found was a little blob of land off Australia’s southeastern coast called Broughton Island. I’m not a great sailor so to cope with the crossing from Port Stephens I laid down in the well of the boat. I’ve developed this technique to keep my innards intact. The island is inhabited by not much more than the occasional fisherman and a tame sting ray or two. The researchers, writer and I had access to a fishing shack for sleeping, but there wasn’t much of that with all the nocturnal work.

The species itself (Litoria aurea) has been floundering in recent years, desperate for habitats in which to survive. On Broughton, the frogs had done so in a most unusual way. With very little fresh water on the island, they had adapted to laying their eggs in slightly salty water. Pools of rainwater along the rocky shores were regularly inundated by sea spray and yet we found viable masses of eggs laid there by the plucky frogs.

After a night of prowling through the rockpools, following in the bootsteps of the scientists as they shone their torches and ran their scoop nets through the puddles, I decided to stay near the shack the next morning. I wanted a close up of one of the captive frogs before it was released back into its home puddle. Sometimes it’s the simple portrait that sums up the story best. I coaxed one from its box onto the only green plant taller than the surrounding grasses – which was unfortunately an introduced cactus. But I liked that the colour tone was similar to the frog’s. (Special Note: never touch a frog with bare hands – their skin easily absorbs disease carrying microbes.)

The resulting series of photos are all “cute” for the simple reason that a frog generally has a cute face. If you think about it, that’s because they have a forward-facing pair of eyes. They seem to lock eye contact with us humans. Plus, from that angle, the mouth seems to turn up into a hint of a smile. Or is it down in a smirk? I also love the sticky pads on their feet which seem to cling like a baby’s grip.

I used the lens I always use for a portraits, whether of large people or tiny fauna, and that’s the exceptional Micro-Nikkor 105mm f2.8. There was no problem with the available light, filtering through a slightly overcast sky, so I just occasionally held up a small reflector. A simple portrait, and sometimes these are the most effective.

I love these moments of closeness with an animal. The frog was not stressed and neither was I. In fact, a feeling of calm comes over me as I relax and get into the composition. It’s like we’re working as a team, the model and the photographer, trying to come up with the best angles and exposures.

By the time the scientists returned, little froggy was back in his box and I was ready for the next foray. Here are just a few of the photos I shot for this assignment.

But alas, the number selected for final publication was even fewer. Have a look at the published article. If you’re keen to do assignments yourself, I’ve included a few Photo Tips in the next article Plan Your Shots for an Editorial Assignment

So what do you think about this assignment or how I shot it? Feel free to critique – don’t worry, I’m still learning.