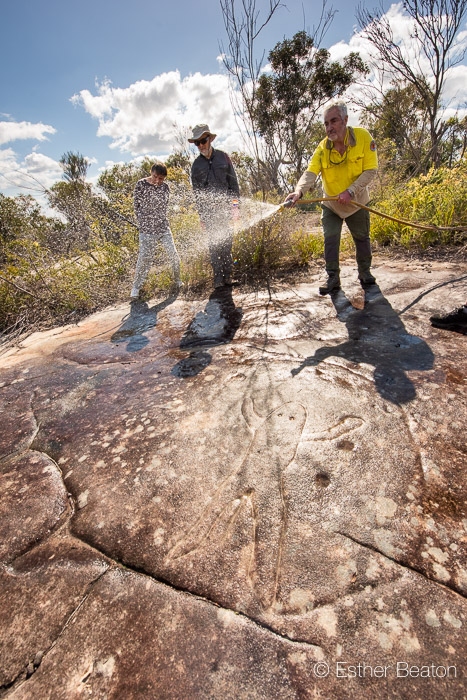 Revealing secrets – “invisible” carvings become visible to the eye with a soaking of water.

Talking about rocks (well, I was – in the last blog post), our Meetup group had a lucky encounter at one of our recent events. But it didn’t start out that way.

Normally I do a reconnaissance before leading people to an obscure location. But this time I thought: oh, I’ve been there before, I’m sure I’ll find the place again. 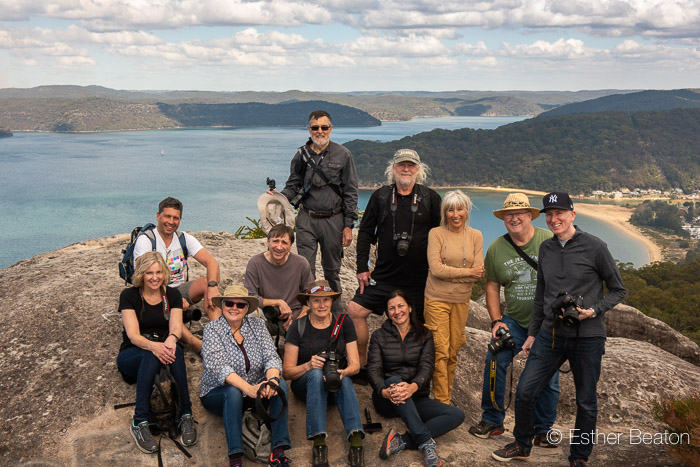 Our Meetup group to Elephant Rock – a great viewpoint over the seaside village of Patonga, New South Wales.

Well, I did find the first location, called Elephant Rock. But the second location decided to elude me. I led our troop, all ten of us, down the busy and winding road. But where was that darned spot? After 10 minutes of trudging I realised it was not this way. Back up the hill we went, jumping into the ditch every time a speeding car wanted to mow us off the road. The participants cheerfully followed me, their little leader, with complete trust. I really wanted them to see these strange rocks, which I had dubbed “Bubble Rocks”, because I thought they were so cool. But I couldn’t find the mysterious geological pavements! Then a ranger’s truck drove by and I chased after him hoping he’d hear my shouts as he went around a bend. These mysterious rocks, covering a fairly large area, have all sorts of legends as to how they came about.

This event could have gone pear-shaped, but it turned out to have a terrific ending. The ranger had heard me and stopped. Not only did he know the way, he turned his truck around and led us there. When we arrived he also pointed out some aboriginal carvings which I never knew were there. They were so faded as to be almost impossible to figure out. Not a problem for him. He drove his truck close to the spot, unhooked his fire-fighting hose and sprayed the carvings with water. What magic was revealed! We could clearly see a spirit creator waving his hands and also a huge whale-type creature in its entirety – even with a “spear” (a fissure in the rock) in its head. 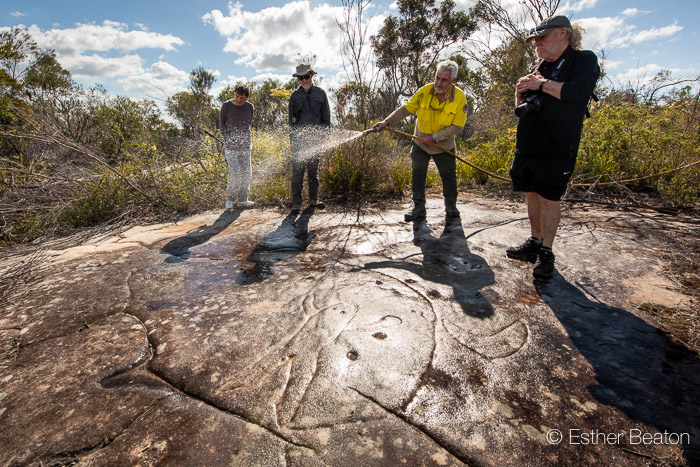 The aboriginal people carved the outlines into the natural rock using a “pecking” technique. But occasionally they incorporated a natural feature as part of the art, as in this case where a fissure was turned into a spear.

I found the whole event astonishing. I had no idea those carvings were there, nor did I know about revealing them with water. I am so grateful to this kind-hearted ranger who took time off from his work to give us this treat.

See what happens when you join our Meetup group?

2 Comments on “What the Ranger Revealed”