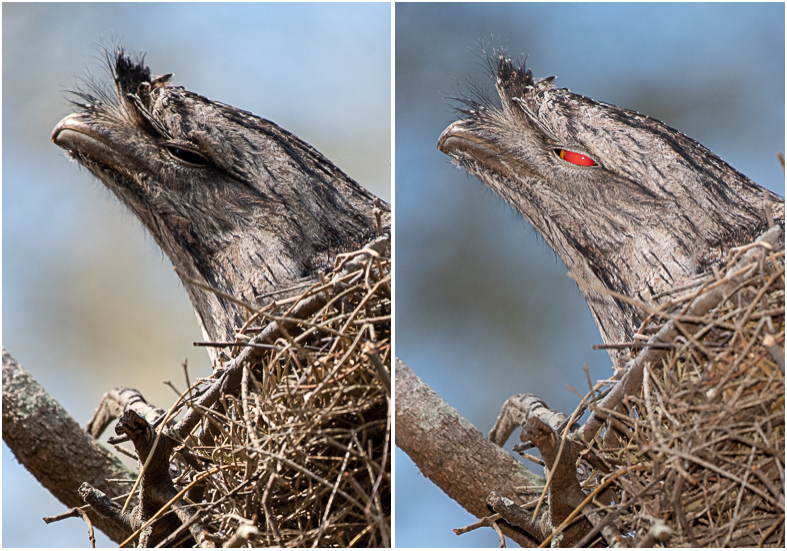 I still don’t fully trust hand-holding my long lenses so I’m always lumbering around with a big tripod. But after I bought the Nikon’s f5.6 200-500 mm, I thought I’d give myself a break, and make use of its light weight. Even using the reciprocal rule of 1/500 shutter speed, the image isn’t crisp enough. Compare the side by side enlargements above. Still at 1/500th shutter speed, but I’ve added flash. Now I’ve achieved the maximum sharpness that the camera’s resolution is capable of. (Normally I correct the redeye, but in this instance I liked the dramatic effect.)

But I was getting pathetic results. That reciprocal rule, which worked so well in film and early digital days, just wasn’t working anymore. I kept complaining about the camera — that the mirror vibration was causing camera shake, the very thing the reciprocal rule was meant to prevent. Even with my heaviest tripod I wasn’t getting acceptable results.

And yet I was getting blazingly crisp images with flash. Clearly both the lens and sensor were capable of producing optimum sharpness. Finally after almost two years of struggle I had a realisation. The “reciprocal rule” no longer works — at least not with high resolution sensors like my Nikon D810. Once I started shooting at 1/1250 and faster (about 3x faster than the reciprocal rule), the sharpness was back at last.

I got into some bird photography during spring and summer (thanks to inspiration from local photographer Geoff White) and I’m happily hand-holding my long lenses like never before. So the tip is: nix the standard reciprocal rule and use much higher shutter speeds with hi res cameras.

Also, have a think about coming along to a workshop, bird photography or otherwise.