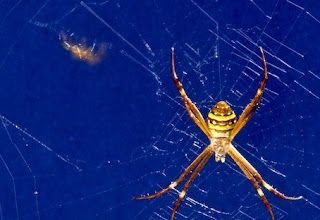 This little feller wasn’t invited to compete in the high-wire gymnastics at the Olympics – probably due to unfair advantage. His type was born with extraordinary skills and an especially strong dose of pluck and courage built right in to his DNA.

The female St Andrews Cross Spider, common in gardens, is a model of sexual cannibalism. Tiny, almost invisible males sit on the outer edges of the great female’s web, waiting for a chance to perform their amazing courtship routine. I was busy photographing the female when out of the corner of my eye, I saw this little guy rush in close to the female, cut a hole in her web and then build a tightrope of his own silk across the hole. Just when she was about to race over to finish him off, he started twanging his little heart out, hanging upside down and twirling a rhythm which stopped her in her tracks. While she paused in indecision, he swung off his tightrope, dove under her abdomen and quickly mated her. Furious, she tried to grab him but he got away, leaving only a couple of legs dangling in her clutches.
However, he still had a contribution to make, so he recharged with sperm and started twanging again. Eventually, when he had only 4 legs left out of his original 8, he sat on the sidelines, exhausted but satisfied that he had produced an effort worthy of gold.
How many Olympic athletes have such stamina to keep trying after several body parts have fallen off? And speaking of stamina, being a photographer willing to set up and record events of nature’s Olympics deserves a medal or two – too.

6 Comments on “The Spider Olympics”