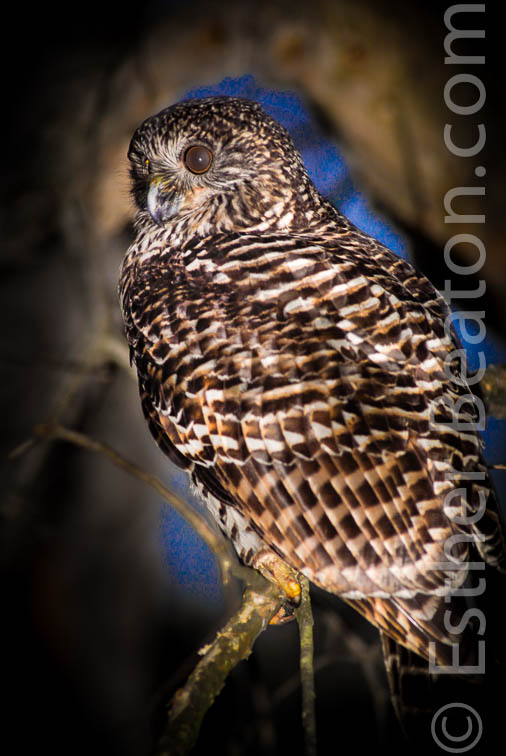 As a nature and wildlife photographer I’m outdoors a lot and I often get into scrapes. They make entertaining stories to share on blogs and elsewhere. One time, however, it was my photographic subject that got into one – or almost.

I was walking home one cool August night, in the quiet seaside village of Pearl Beach where I used to live. There was no traffic, nor any street lighting, just the light of the full moon. In the dark shadows of some trees, I saw a bulky shape in the path ahead of me. I continued towards it, not particularly worried, when suddenly it flew up in front of me. I stopped in surprise. The creature flew into a paperbark tree across the road. As my eyes adjusted in the dark, I realised it was an owl – a huge one!. What had it been doing on the ground?

I stared at it. It stared back at me. Should I try to photograph it? It was on a low branch about the height of telephone wires and seemed determined to stay. OK, I said to myself, let’s go for it. I turned and ran the two blocks to my house, grabbed camera, tripod, long lens and flash, hopped into my car and raced back. The owl was still there!

Calmly and quietly I set up my equipment and brought the bird into focus. Oh no! My lens was too long! The owl was too big in the frame. I could see now that it was a Powerful Owl, the largest in Australia. No wonder the shape on the ground appeared so big and bulky. These owls stand 60 cm tall (24’) and easily carry off 1.5 kilo (3 pound) possum as their prey – more than 100% of their weight. I couldn’t back up as a house was behind me. As I stood there wondering how to solve my problem, a dram
a began to unfold.

A car was coming towards us. I was on one side of the road, the owl on the other. Spotting me, the driver slowed down. “Oh hurry up!” I silently willed the driver, thinking the car would surely disturb the owl. Then everything happened at once. A large rat sped out from a tufty bush near my feet and into the path of the approaching car. The owl swooped down after it, almost colliding with the car’s headlights and oncoming wheels. A split second and it was all over. The rat had found a larger bush; the owl had missed the car – and his meal. The driver passed by slowly, staring at me through her window, never realizing what spectacle had played out just below the hood of her car.

I walked home, understanding now what the owl had been doing on the path – stalking the rat, and thinking that no matter how advanced our photographic equipment becomes, nothing will be fast enough to catch such amazing action.

I normally like to prepare ahead for my photographic projects to ensure success. See my article on “How to Photograph Owls”. Have you had any luck photographing owls – or other noctumal animals – on the fly?