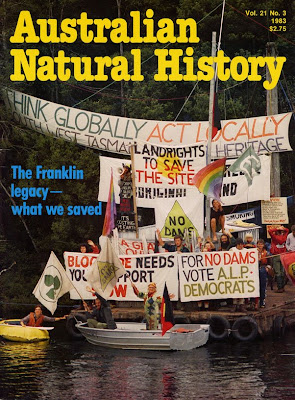 One of the most significant environmental events in Australia occurred in 1983. And I was there. It was January, I was on my honeymoon with my French photographer husband, Jean-Paul Ferrero and I was on a mission to try my hand at my first ever photojournalism piece. We cruised down Tasmania’s Gordon River and camped in old fishermen’s huts. I photographed and interviewed protestors as well as the beauty of the fog-shrouded landscape.

Back on the mainland, I nervously wrote up a story and submitted it to Natural History Magazine. I completely expected them to refuse it. I was dazzled beyond belief when they not only accepted it, without subediting, but even made one of my shots the cover photo. It was also a lucky coup that it came out just about the same time as the High Court’s ruling which halted the damming of the magnificent Gordon River and turned the governments of the day upside down.
Today, July 1st, is the 25th anniversary of that ruling. I would like to honour that date by publishing the cover of that magazine issue. I realize now that the role of a photographer can be an effective one, even when it might not seem so at the time. Thanks to all the ordinary people involved, whether in-your-face protestors or behind-the-scenes supporters, that pristine environment of huon pines, king billy pines and cold, soaking rainforests is today a World Heritage Area and a testament to the power of the people. Right on photographers!

3 Comments on “Photographers, Politics and the Environment”