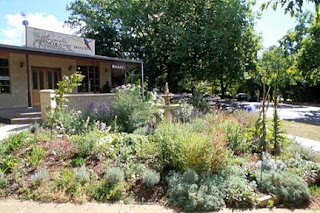 In 1999, as I sat at this cafe in the centre of Marysville, I had no idea of the consequences of my upcoming assignment. David Lindenmayer and I were outlining the chapters of a new book, Life in the Tall Eucalypt Forests, and planning my shooting schedule for the next 12 months.

Over the following year, I toured the ranges and forests beyond the pretty little towns and photographed the giant Mountain Ash trees which were so susceptible to fire. Wherever I went, the terrors of ‘Black Friday’ which took 71 lives in 1939, were still visible. At sixty years old, the regrowing Mountain Ash youngsters still had a long way to go before they reached their mature age of 300 years. The phrases ‘Black Friday’ and ‘Ash Wednesday’ were still spoken in a serious voice as locals recalled the human losses as well.

I stayed at Healesville and Marysville, using these places as a base. I bought my groceries, drank at the pub and shared yarns with the locals, never realizing these towns would be devastated so soon in the future.

Now, ten years later, I can turn the pages of the book and travel again into the heart of the Yarra Ranges, admiring the resourcefulness and beauty of nature as it recovered and grew out of those losses. I hope that my collection of photographs, as published in the book, has some value in not only preserving the once beautiful landscape, but in stirring hope in the hearts of the communities that it will once look like that again.

As photographers, we have a mission far grander than just pretty pictures. When you assign yourself the task of travelling deep into a region, getting to know it at a core level and recording its wonders with iconic imagery, you are contributing far, far more. You are leaving a legacy. As nature photographers, our job is to use our skills plus our determination to create majestic bodies of work. One day, that might be all that remains.

You can give money to the Victorian Bushfire Appeal by calling the Red Cross on 1800 811 700. Or you can contribute in another way. You can donate your time and energy to the preservation of our planet by taking memorable photos.