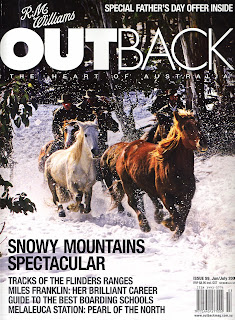 Have you seen the latest issue of Outback magazine? It’s published by the outfitter RM Williams. They manufacture such high quality supplies and clothing for stockmen that the clothes have now made it into mainstream fashion. The magazine is a lovely evocation of the life of country people in Australia. I guess it’s a bit like England’s “Country Life” toned down for us simpler, down-to-earth Aussies.

I was lucky enough to get on the cover this month. (That is, one of my photos did.) Have a look at the June issue. Powerful photo, isn’t it? I bet a lot of overseas people don’t realize we have an alpine area blanketed by snow in winter (which is now).

The story behind this shot is just as good. I was asked by a documentary filmmaker who was producing a movie on wild horses, or brumbies, to be the still photographer. Brilliant – what a fantastic gig!

We were woken well before dawn in the most amazing way. There was quite a group of us: stockmen (the actors), cameramen, soundman, all camping in one of those old high country wooden huts. Suddenly, in the blackness of predawn, we were startled out of our sleeping bags by the haunting soundtrack of “The Man From Snowy River” movie, blasting out across the snow-covered valley.
Usually, when I’m on a shoot, I give the orders. I tell people where to stand, how to move, etc. But this time, I was low man on the totem pole. Not only did did cameraman number 1 and cameraman number 2 have priority, but even the soundman had more decision-making clout than me. While we were waiting for the mustered horses to come charging down towards us, the sound recordist told me to go stand behind a bush so the clicking of my shutter and motor drive would not be recorded. I was quite frustrated, thinking that I wouldn’t get the shot I wanted. My heart was hammering away and I was desperately hoping my settings were accurate, knowing I would only have a few seconds to capture the shots of a lifetime. It all turned out OK. The series of photos from that assignment have sold well and I’m glad they continue to be used to promote the amazing spirit and atmosphere of Australia – just like in this issue of Outback magazine.