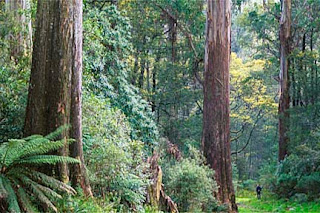 A recent media release announced that scientists had measured the most carbon dense forest in the world.

No, it’s not in the Amazon – it’s right here in Australia and I know it intimately. I worked hand in hand, for over a year, with well-known ecologist David Lindenmayer, one of the team of scientists who made the discovery. (He’s the figure in the photo providing scale for the giant trees.)

At the time, we were working on a general ecology book about the area, in the Central Ranges of Victoria. I was privileged to gain access to this hidden locale, with all its unique wildlife, and to be the photographer to take exclusive, eye-popping beautiful images. At the time, we had no idea (well, I didn’t) of what an important forest this was.

It turns out these trees have been affecting the world’s climate. As other forests have been removed from around the world, whether by logging or burning, the carbon that was tied up in the timber has been going into the atmosphere. However these forests of Victoria, because they have remained in their pristine natural state, have been the quietly storing huge amounts of carbon. One of them, the undisturbed O’Shannassey forest with trees as much as 400 years old, has a carbon sink capacity of over 2800 tonnes per hectare (1540 tons per acre). An average forest in the northern hemisphere has a capacity of only about 217 tonnes per hectare (97 tons per acre). The O’Shannassy forest was never logged due to being in the catchment for Melbourne’s water supply.

The forests in the Central Highlands would have released a lot of carbon dioxide into the atmosphere had they been cleared but, thanks to the lucky circumstance, they are now benefitting the world’s climate and reducing greenhouse gas emissions on a global scale.

As a photographer, it’s OK to take pretty pictures. But it sure feels extra good to know that your work has impact on other levels.

One Comment on ““Is this the Most Important Forest in the World?””