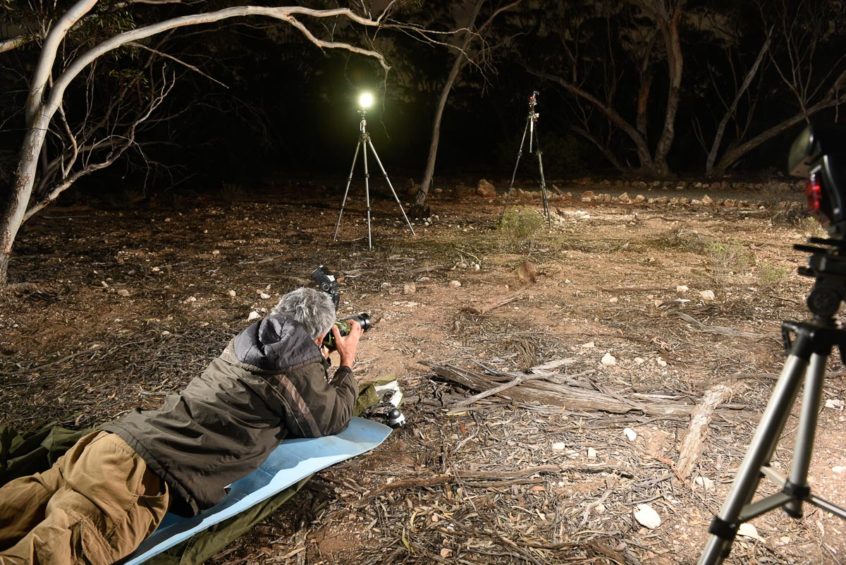 I love the Australian Wildlife Conservancy. I love all conservation groups but the AWC has an astounding success rate. Not only are they re-establishing populations of highly threatened species, they are achieving the job at discount rates. They run a mean, tight ship as far as admin spending goes. Income goes almost entirely to field projects.

So a trip in October ranging through AWC sanctuaries in South Australia and New South Wales was a special treat. I met up with AWC’s staff photographer Wayne Lawler. His task was to get new field portraits of numbats, bilbies, woylies and boodies. (Isn’t I great that we’re using aboriginal names now for our wildlife instead of those awkward colonial words like “rabbit-eared’ or “brush-tailed” whatsits?)

You see, I’ve worked out my own techniques for wildlife photography over the last 35 years, almost entirely on my own. I used to read books on the subject, but they were always written by Americans or Europeans and the techniques simply don’t apply in Australia. So I was surprised, delighted and vindicated as I watched Wayne at work. It turned out his techniques were identical to mine! He too had worked them out the hard way, after decades of fieldwork. Although I must admit a small difference: Wayne is far more dedicated to getting results almost exclusively in the wild, while I’m willing to work with captive subjects more often.

Australian mammals have some characteristics that make it hard to photograph them in the wild. I’m finishing up an extensive article on our tracking techniques. Watch out for it in coming weeks. Better still, sign up for my newsletter and you can be notified.