The impossibly cute face of a Gould’s Petrel chick, once a seriously endangered species.

Several years ago, I partnered up with science writer Karen McGee to produce a feature on Gould’s Petrel for the UK magazine, Geographical. Most stories of endangered species I find confronting, but this one turned out to have a happy ending. Nicholas Carlile of the National Parks and Wildlife Service on the east face of Cabbage Tree Island.

Gould’s Petrel nests almost exclusively on a tiny bunch of rocks off the coast of New South Wales. One of them is called Cabbage Tree Island. It’s a place inhospitable to humans. The steep slopes are covered in sharp-edged granite while two interior gullies, also steep-sided, are tangled in rainforest. 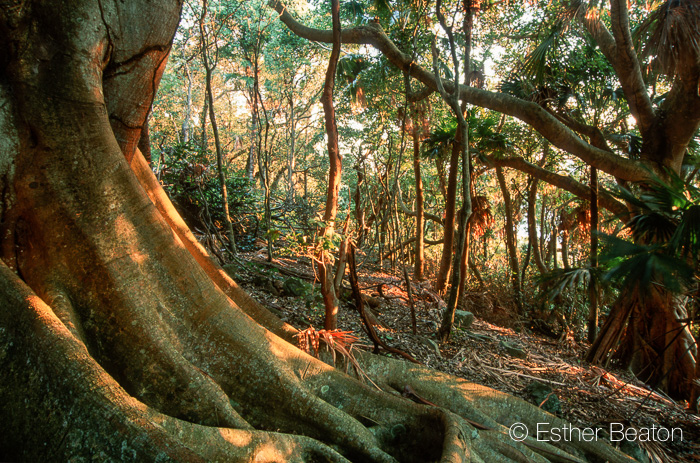 We met scientists from National Parks and Wildlife Service, David Priddel and Nicholas Carlile, at Port Stephens. As our boat aimed toward the little island, the swell was huge. We went up big waves and thudded down into the hollows between. Terry O’Dwyer, from the University of Wollongong, came out in a rubber ducky with a 5 hp motor to transfer us to the rocky shore for the hazardous landing. We carried our gear up the steep slope, always leaving one hand free for hanging on. David Priddel and Nicholas Carlisle of National Parks and Wildlife Service have been working for the survival of Gould’s Petrels chicks on Cabbage Tree Island for over 20 years.

We snatched a quick cup of tea, then set off to scour the two gullies where the seabirds nest. Dave and Nick had the task of visually sexing the chicks by studying their cloacas. Judging by the discussions and mutterings, they had difficulty determining the differences from the tiny holes which were only 3 mm across. (The chicks however didn’t seem to mind being turned upside down and squawked less than the men.) But thanks to Terry O’Dwyer’s analysis of their blood, which he had extracted earlier, the DNA will back up their guesses. 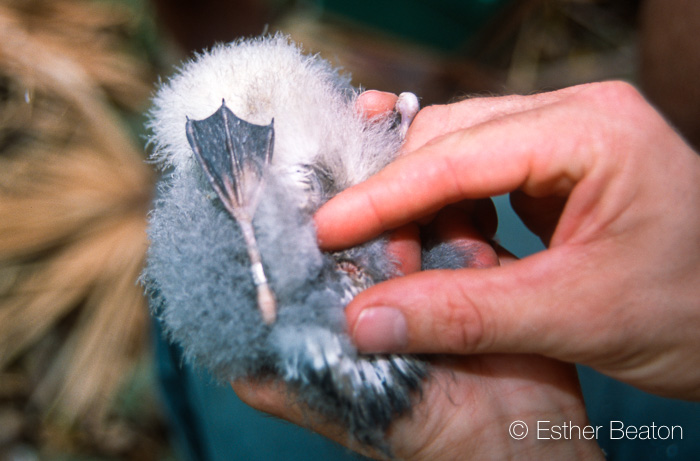 Terry O’Dwyer from the University of Wollongong notices that petrels will make anything do as a nest, including scrapes, loose rocks and in this case, a hole in the base of a tree. 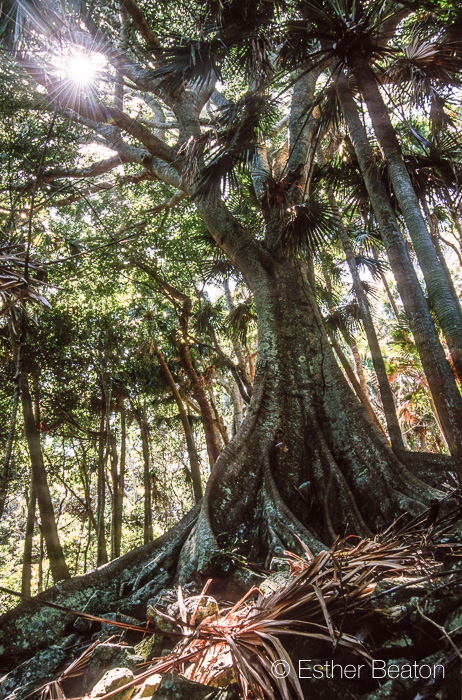 The entirety of Cabbage Tree Island, off the coast of Port Stephens, is well-protected as John Gould Nature Reserve.

This was no easy assignment for me as a photographer. The scree slope consisted of blocks of sharp, crumbling granite. With the covering of slippery fallen palm fronds, it was difficult to navigate. There was no level ground anywhere and as I shouldered my gear I was tilted sideways the whole time. To make it worse, we had to watch our step because if you dislodged a rock, you could be damaging a petrel burrow and its chick – and the ground was quite covered in burrows. Sometimes the burrow was just a scraping under a palm frond, or inside a rotting log. I felt I couldn’t step anywhere! Gould’s Petrel (Pterodroma leucoptera) an adult on its nest among the granite scree slopes of Cabbage Tree Island.

David Priddel and Nicholas Carlile had been studying Gould’s Petrel since the 1990’s, when it was thought that Cabbage Tree Island was the only place in the world this subspecies nested. Every year fewer birds were surviving until it looked like the population, with fewer than 500 birds, was on the edge of extinction. They were the victims of birdlime (Pisonia umbellifera). The seeds get matted in the feathers, the birds can’t fly and eventually starve. 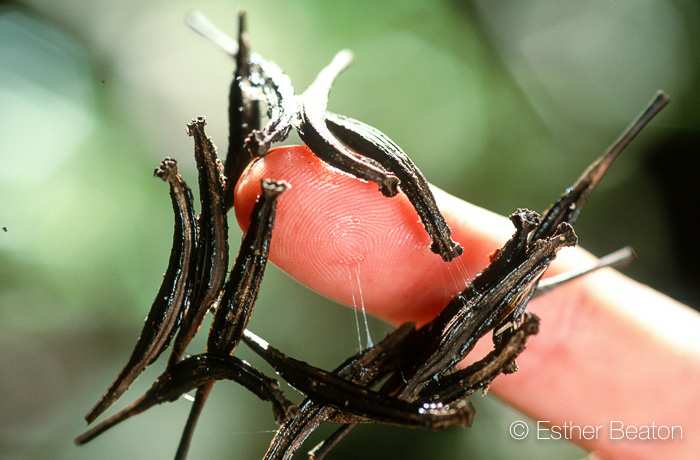 The sticky seeds of birdlime, a native coastal tree, sticks to anything, including Gould’s Petrel chicks, and leads to death.

It mystified me how the petrels could succumb to the sticky seeds of birdlime. It’s a native rainforest plant and part of the habitat where the seabirds have been nesting for eons. Evolution says they would have adapted by now.

It turns out the culprit was rabbits. Introduced to Cabbage Tree Island many years ago for bacterial testing, they soon overran the island. As they depleted the understory vegetation, currawongs and ravens now had open access to the unprotected nests and they soon decimated the helpless chicks. Gould’s Petrel (Pterodroma leucoptera) chick in a specially made nesting box which has a high success rate.

Priddel and Carlile began the hard work of removing the birdlime trees, currawongs and rabbits. They installed artificial nest boxes and transported birds to other islands. By 1997, Gould’s Petrels were on the upswing and over 2000 birds were documented – a massive 5x increase. By 2010, the population hit 2,500 and was still increasing. And there’s more good news. Today they are nesting on other islands and have even extended to Montague Island, several hundred kilometres to the south. 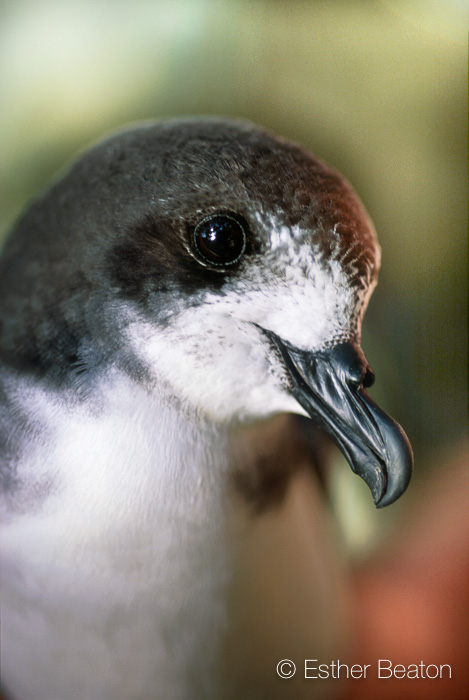 Gould’s Petrel is a handsome bird, only 200 gms in weight, yet tough enough to withstand the Antarctic seas for six months of the year.

I’m telling this story as my attempt to support the Twitchathon, just completed yesterday. The money collected by the New South Wales teams goes towards the ongoing maintenance of Gould’s Petrel, as well as the White-faced Storm Petrel. These tough little birds, who stay on the wing most of the year hunting over stormy seas, deserve a chance when they have to come to land for egg-laying. Surely we can welcome them to our shores by keeping their habitat healthy and protective for their chicks.

If anyone does want to join in their support, probably the best contact is https://www.justgiving.com/fundraising/Twitchathon-NSW-ACT. You also can’t go past the terrific website birdlife.org.au for all things bird.