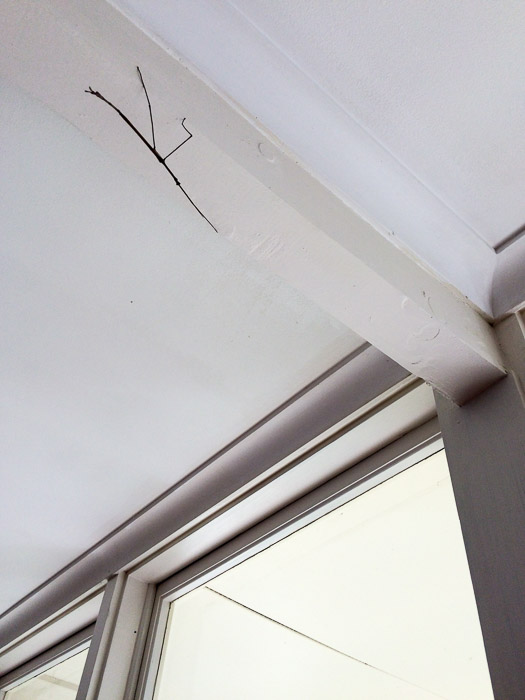 A stick insect dropped in one day. Not a large one. Probably blown in by the wind, which we’ve been having a bit of last few days. (In fact I’m writing this under “cyclonic” conditions.)

Well, here’s a surprise: not only do we have really, really large stick insects in our country, but we probably host the longest insect in the world: 61.5 cm long. (That’s over 24“ to you American folks.) If you don’t believe me here’s one record-holder.

Other species are quite large too and, with the ones I’ve photographed over the years, you hardly need a macro lens.

In Victoria’s mountain ash forests, I photographed the Titan Stick Insect, a good competitor at 27 cm long (only a foot or so).

My ceiling visitor (I call it the “brown stick insect”) is a common species. I had previously found and photographed one in my garden. The females only reach 18 cm long.

How to Photograph Stick Insects

Here’s my process when I photograph insects like these. They eat the canopy leaves of tall eucalypts so you pretty much have to get them into a studio. I put them in a nice big transparent container with some leaf matter and a water-soaked cotton ball. Then let them settle down while I create a set. My set consists of a plain background, like coloured paper, and some branches or leaves. I make sure to find the correct vegetation for that species. In the case of the brown stick insect, I searched around  and realised he had blown out of the ironbark on my front lawn. So I collected a few leaves from that.

Next step is to set up my lighting. Since I use Nikon dedicated flash units. I start with the basic positioning: one SB Speedlight to the rear to act as backlighting and a second unit near the camera to act as the main light. (Or you could call it a strong fill light.) Then I adjust the strength and ratio of the units, as well as degree of diffusion, according to each subject.

Once ready, I place the insect, which is quite calm by now, onto the vegetation. You can see that the Titan shot has stronger backlighting and the fill-in light is quite strong, i.e., no diffusion. However, with the brown stick insect, I diffused both units. I wanted to create a “trompe-l’oeu effect where the viewer has to search to make sense of the picture. In hindsight, maybe I should have created a harder, more defined edge to separate the insect from its environment and make the image pop a bit more.

Once finished, I say thank you (I’m serious!) and take it back to where I found it, or put it back onto its native vegetation.

Finally, to wrap up, I’m including a humorous type of shot of another insect called a Stick Mantis. It may look like a stick insect but it’s not. You can tell by the wide set eyes that t’s a type of preying mantis and it’s favourite meal is not leaves but other insects – probably stick ones! I’d love to hear your experiences with stick insects. If you’ve got some good shots, please show me – either put them on my Facebook page or direct me to it online.